Facebook is social media. Because of that, it operates differently than most media you might be familiar with. You can’t get the bet response (or to use the social media buzzword, “engagement”) from a post that says something like “Come to the Media Ministry interest meeting on Saturday!” People will see it as an ad and ignore it. In addition, Facebook will see it as less valuable content and it won’t even show up in many people’s timelines. It’s just not worth the time to post it.

Well the first thing you need to do is tell a short story. Make it interesting to people outside of your specific audience. Talk about the ministry or event itself. Why is it important? What will people get from it? How does it impact the church, the world, or the individuals? It doesn’t have to be much, just 2 or 3 paragraphs. In fact too much is maybe worse than too little, because no one will read to the end!

Next, pair it with an engaging image. Photos from past events are perfect, but if you don’t have any, stock images can work too. Avoid things like clipart or simple illustrations and choose photos. Video is great, too, but less common and harder to get the right one. 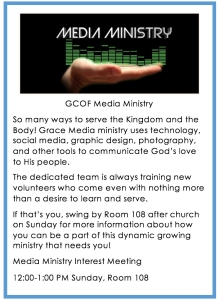 Don’t forget to tell people about the upcoming event at the end of your story!

That’s it! Pretty simple, and if you have questions or need help crafting the post or finding the right images, just talk to the Media Team.

So let’s take our Media Ministry Interest meeting and get it in shape for Facebook!